If you've followed the Naptown Scoop for any amount of time, you'll know editor Ryan loves ice cream. Heck, he named the whole company after it. So we figured it was about time to rank the best ice cream in Annapolis.

Hi, I'm Kait. My love of fantastic food stems from growing up on Long Island in a food-loving family. I became a mom last year and am now instilling the same epicuriosity in my own family. You can follow my pursuit of the best local eateries on Instagram.

Note: No business paid to be on this list. Nor did they know we were coming or give us free ice cream. Every shop on this list earned their spot through the merits of their dairy. 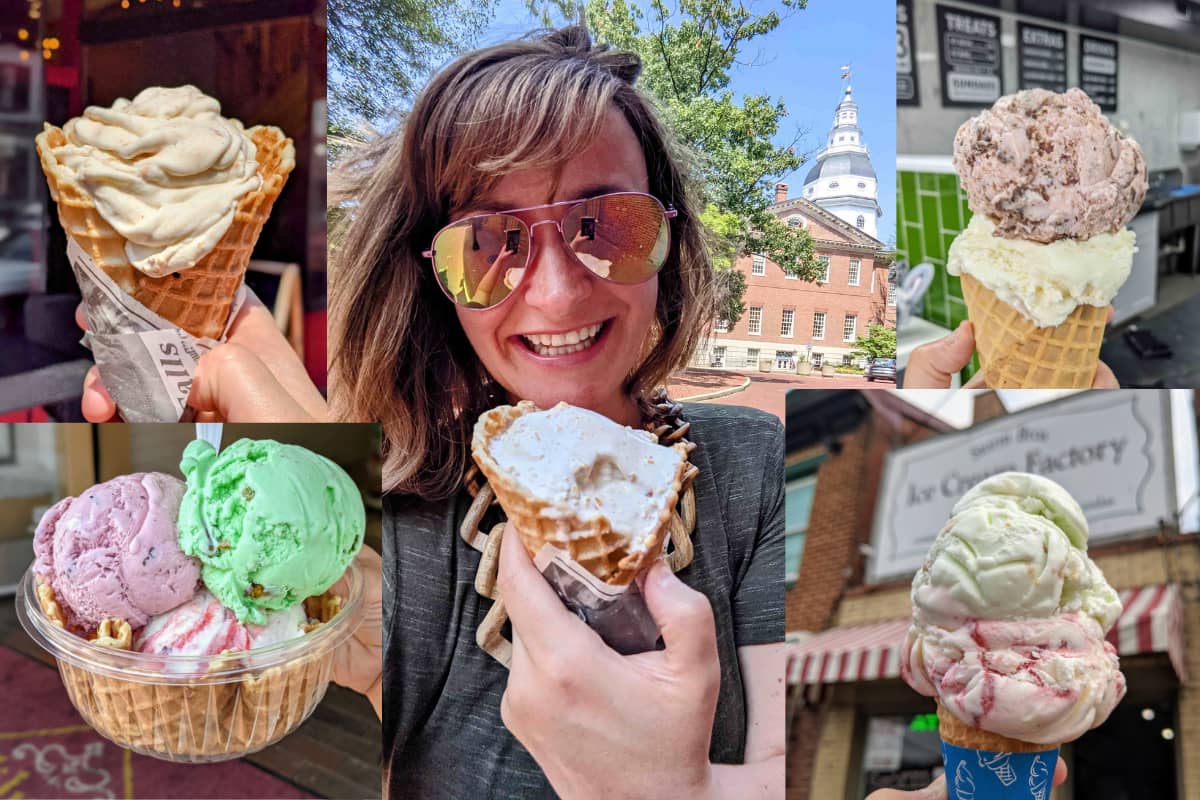 Annapolis has its fair share of ice cream shops. But it's tough to tell which is the best. Especially when four of them are within 1,500 feet of each other. Here's a pro tip: you can't go wrong with any of the Main Street shops, but there's a clear winner.

During my recent visit, I ordered an ice cream sandwich. I figured it was the perfect way to try their homemade ice cream and signature baking. The chocolate chip cookie was sturdy on the outside and soft on the inside—a perfect wrapper for my peanut butter cup ice cream. And yes, it tastes as rich as it sounds.

If someone in your group wants more choices than ice cream (or you just don't want to fight downtown traffic), Smallcakes is the place to go.

If you've ever strolled down Main Street, you've probably smelled Kilwins. It's like walking by an Abercrombie store at the mall. Except instead of high school cologne, it smells like Willy Wonka's chocolate factory.

And you've probably watched the team hand dip caramel apples and paddle their classic fudge. But have you tried their homemade ice cream?

Kilwins ice cream has been made from the same recipe since 1985. And while it's not made in store, Kilwins manages the whole process from mixing to shipping so it's always high quality.

Ego Alley's historic ice cream parlor, Storm Bros., is the perfect place to grab a cone before strolling the docks. And even if they aren't number one for ice cream, they're definitely number one for views.

Storm Bros. opened in 1979 and is still owned and operated by the Storm family! The extensive ice cream display, framed by a bright red brick wall (great for Instagram) will have your mouth watering as you choose your flavor. Summer classic key lime pie is my go-to. But nothing at Storm Bros. ever disappoints.

The Red Bean has the most unique flavors on this list. And as an added bonus, they source ingredients from several local partners—most prominently Middletown's South Mountain Creamery. The Bean was born out of a dream to offer the most delicious and distinct ice cream around, and it sure does deliver.

Ever had Old Bay pretzel ice cream? What about a cinnamon, chocolate and chili concoction? Or if you're the creative culinary type, build your own masterpiece. Red Bean has over 50 mix-ins for your confectionery pleasure.

Full disclosure: editor Ryan might prefer "hard ice cream", but I'm a sucker for soft serve. And this charming Main Street joint never lets me down. I ordered the Old Bay pretzel with some trepidation, "Hmmm... this may taste awful" but BOY WAS I WRONG.

It was the best soft serve ice cream I've ever had.

It's no surprise AIC tops this list. After all, this sweet little shop has earned "Best Ice Cream in Annapolis" 18 years in a row. Lucky for us, they're making big moves. To complement the original Main Street location, they now have a second store and truck under their new brand: Always Ice Cream Company. And there's another store on the way.

You can't go wrong with the original location on Main Street. But for our West Annapolis friends, you can avoid the downtown craze at the first location of the new brand, Always Ice Cream. Either way you'll indulge in Annapolis's #1 ice cream!

No Maryland ice cream ranking is complete without at least mentioning Pasadena's Daily Scoop. They're just outside the Naptown Scoop's radius (10 miles from the State House). So we couldn't include them in our top five. But since it's close enough, we had to acknowledge the 100+ delicious house-made flavors. If you ever find yourself in Pasadena, don't miss this retro-styled gem.